Posted at 10:00h in Uncategorized by pont3 0 Comments
0 Likes
Share 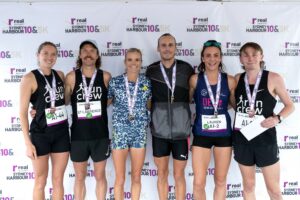 Today 5000 runners came out in force to take part in Sydney’s first major fun run that has
been able to go ahead this side of lockdown.

Taking out the title in the strong elite male field for the Real Insurance Sydney Harbour
10k was Ryan Gregson won in 29:31 ahead of Ben St Lawrence who finished in second
place in 29:39. Third place was taken out by Kieren Tall in 30:29.

The Real Insurance Sydney Harbour 5k men’s race was taken out by Cameron Gill who set
a new course record finishing in 15:33 and Anna Laman who has not competed in 18-
months won the women’s event in 17:01.

More than 5,000 runners registered for the Real Insurance Sydney Harbour 10k and 5k.

Set against the backdrop of Sydney’s breathtaking harbour, The Real Insurance Sydney
Harbour 10K and 5K is a certified accurate flat course with incredible view and enjoyed by
walkers and runners of all abilities.

The 10k is popular with elite and experienced runners who want to race for a good time
ahead of their usual events. The day started clear but there was a downpour of rain
minutes before the 10K started.

2021 Real Insurance Sydney Harbour 10k Men’s winner Ryan Gregson said it was a great
race, but it was a difficult run today.

“There was a point around Darling Harbour where I apologised to Benny St Lawrence and
Kieran Tall as I was slowing down so much in the turns and they were like “Don’t worry, we
are about to topple over too” but on a dry day this course is really fast.””

Ryan is often a 1500m runner and has stepped up to the 10K challenge. He told Reidy
from Bondi Rescue that now that he is 31 his 1500m days may be coming to an end.
“I am open to other distances,” said Gregson.

“I want to give marathons ago before I retire to see what it is like. I have a huge respect for
that race”.

Next up he is aiming for the Commonwealth Games and he will be competing next in the
1500m in February next year.

Ben St Lawrence, founder of Run Crew and athlete for PILLAR Performance who finished
in second added “I have still never won this race. It is another second for me so I will have
to keep coming back trying win it!”

“We had a good close race with three of us together until he hit 3K to go, but then Ryan
was just so strong in the last 3K. I managed to dig deep and chase him across the line. It
was a bit of a slippery course as it was raining right before we started but it was a good
challenge.”

“May was the last major event in Sydney so it was great to see everyone get together to run
today. I am coaching a big Run Crew team for this race and seeing the grimaces but also
the smiles as they cross the finish line is really good to see.”

“I went really well, I’m so happy with that.”

“I ran my first marathon 9 weeks ago in London and I wasn’t sure if there was enough
recovery time to do this one, but I pulled up really well.”

“I’m just really excited that road races are back on in Australia and Sydney, it’s just so great
to see everyone out here having a great day. The course was really good, surprisingly I ran
a great PB, it was a bit slippery running around the corners, but I’d really love to re-run the
route on a day when there’s no rain.”

“We are thrilled to have been able to run the event in 2021”, says Event Director Wayne
Larden.

“There’s nothing better for us than seeing thousands of smiling faces lining up at the start
line, embarking on their journey with friends, family or colleagues taking part in a physical
running event again.”

“We know running has been an incredibly popular solo pursuit during lockdown but there
is nothing like the atmosphere and camaraderie of a live running event.”

“The flat and fast course continues to deliver a terrific experience for both elite and
everyday runners, providing a fantastic way to stay fit and enjoy what is undoubtedly the
most spectacular 5K and 10K course in the country. It’s a unique way to see beautiful
Sydney Harbour, the CBD and surrounds.”

Jules Sebastian ran the 5k and was in attendance on behalf of The Sebastian Foundation,
a mental health charity founded by Guy and Jules Sebastian and official event charity
partner.

Runners were encouraged to raise funds for the program in the lead up to the event.

“The Sebastian Foundation helps young Australians with their mental health by providing
access to a program that teaches school aged kids psychological skills to give them a coat
of armour to help address and accept life’s challenges – before they become problematic”
says Jules Sebastian.

“I had a great morning running around the harbour and it’s even better when you know we
have raised over $16,000 for The Sebastian Foundation which means we can put 536 kids
through the program, and that many lives will be better off due to this – thankyou Real
Insurance Sydney Harbour 10k and 5k and everyone who fundraised for us”